New and Expecting Mothers are Struggling Now More Than Ever 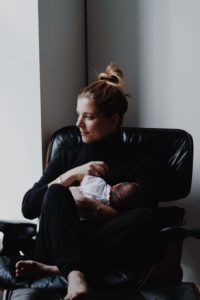 It’s hard to describe the shameful feeling of regretting the infant in your arms.  It didn’t matter how much I’d wanted this child, or how I counted every minute of every day before he came.  Now he felt like the biggest mistake I had ever made. I felt enormous guilt, and like the biggest failure of a mother that ever was. I cried most days. My former self had been stripped away. I thought of ways to escape my husband and newborn by buying a one-way ticket to a foreign country, surely they would be better off without me. On my worst days I thought about ending my life. After six months of silently holding the shame of failing miserably as a mother, I admitted that I needed help. Therapy and medication became a life preserver that pulled me out of a dark, inexplicable, and bottomless sea otherwise known as postpartum depression.

Before the coronavirus turned our lives upside down, a reported 15 – 20%[1] of new and expectant mothers experienced a perinatal mood and anxiety disorder (PMAD). PMADs include perinatal (meaning during pregnancy or up to one year postpartum) depression, anxiety, OCD, PTSD, Bipolar Disorder, and in rare but very serious instances – psychosis. If untreated, these conditions can have adverse impacts on the developing fetus, the emotional and developmental wellbeing of infants and small children, and in the most severe cases can lead to a mother’s suicide or infanticide. Sadly, 50% of all PMAD cases go untreated due to stigma, shame, and fear of having one’s baby taken away. What used to be considered risk factors for developing a PMAD in the best of times — social isolation, lack of a support system, and high levels of stress and anxiety – have only been heightened by the Pandemic. As a result, Maternal Mental Health Experts anticipate that the percentage of women in distress will grow exponentially.

May is Maternal Mental Health Awareness Month, and now more than ever attention must be drawn to the hundreds upon thousands of pregnant and postpartum women who are at an increased risk of developing a PMAD. A recent article in the NY Times called “Where Have All the Heart Attacks Gone?[2]” found that cardiologists report seeing a 40 – 60% reduction in admissions for hospitals for heart attacks. A report from Spain sites similar findings. The probable explanation being that people are choosing to suffer at home rather than seek help in a hospital where they might be exposed to the Coronavirus.  Self-quarantine is healthy until it’s not. Perinatal mental health should not be shelved because of the virus, when in fact it’s very likely been spiked by it and requires treatment more than ever.

The good news is that treatment is available. Tele-Mental Health is more accessible now than people realize. At The Motherhood Center we have moved to a virtual platform in order to maintain all of our clinical treatment options for new and expecting mothers. Therapists, Reproductive Psychiatrists who specialize in medication during pregnancy and postpartum, and support groups are easier to find and more readily available than ever before. Many providers are lowering our costs for treatment in recognition of the financial hardships that so many Americans are facing. And the best news is that PMADs are totally treatable.  Women feel better faster, turning a helpless and hopeless mother into a happier and far less anxious one that finally feels connected to her baby.

The Coronavirus crisis is both a scourge and an opportunity. As long as we’re testing expecting or new mothers for COVID-19, we should be screening for PMADs. Every pregnant woman is tested for gestational diabetes which impacts 2% – to 10% of pregnancies[3], yet screening for PMADs is not mandatory. We should require insurance companies to offer higher in and out-of-network reimbursement rates for mental health treatment. The U.S. is woefully behind other countries when it comes to policies that support families and minimize mental health stigma.

May is also the month of Mother’s Day. The best gift we can give a new or expectant mom is simple: we can ask her — and really ask her — “How are YOU doing?” And if she’s not okay —if she is really struggling —tell her that she is not alone, it’s not her fault, that there is a brighter day within reach with the right treatment and support. We can throw her a life preserver that might actually save her life.

Paige Bellenbaum, LMSW, is the Founding Director and Chief External Relations Officer at The Motherhood Center of New York.  After her first child was born, Paige suffered from severe postpartum depression that nearly ended her life. Once she began to heal, she became committed to fighting for education, screening and treatment for postpartum depression so that no more women would have to suffer silently. She drafted legislation in New York State that was championed by State Senator Liz Krueger, mandating hospitals to provide education on PMADs and strongly encouraging screening of all new and expecting mothers that was signed into law in 2014. Since then, Paige has been an outspoken advocate on the issue of postpartum depression and uses her own story as a tool for change. She has appeared on the Today Show, NPR, PBS Newshour and in Women’s Health Magazine, The Wall Street Journal, and several other media outlets.

Editor’s note: If you or someone you know is experiencing PMAD symptoms including anxiety, scary intrusive thoughts, frequently crying, feelings of hopelessness, helplessness or difficulty bonding with the baby, the following resources are available:

The Most Satisfying White Bean and Celery Powerhouse Salad

Robin Berzin: This Doctor's Approach to Self Care and Exercise 6-Months Postpartum

September 1, 2020
Fit Pregnancy Club uses cookies to optimize your experience on this site. By using our site you accept our use of cookies.Accept